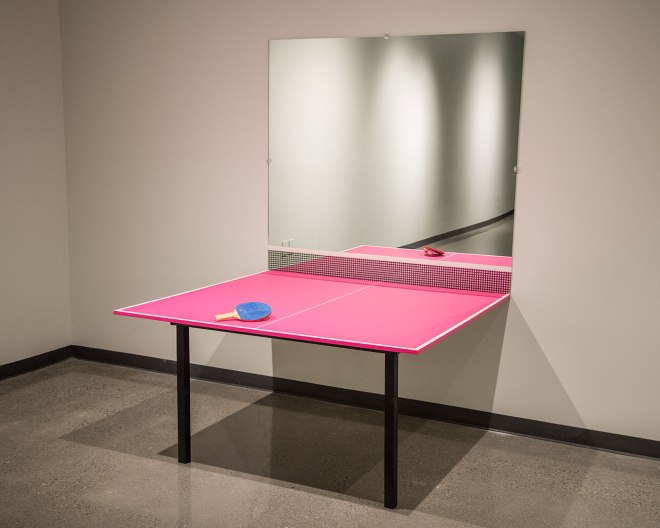 Exhibition Brief:
The Jacki Headley University Art Gallery is pleased to present Trong Gia Nguyen’s solo exhibition Dogg Days. Featuring previous and new works, the latter produced in Chico during a six-week residency, Nguyen’s current work is imbued with the political fervor of our current times. The show title refers to the “dog days of summer,” an expression derived from ancient astrology that portended heat, drought, sudden thunderstorms, lethargy, fever, mad dogs, and bad luck.  Today, the phrase is taken to mean the hottest, most discomforting stretch of summer. Dogg Dayswill include three installations with sculpture, photographs, sound, and video, along with new individual sculpture works that may appear playful on the surface, but maintain a “deep state” of subversion and inquiry.  In these dog days of climate change, rising tensions, and heated politics, the artist insists that inaction and passivity are not viable options.

In the first of two galleries, the installation Neo Theo, 2012 presents a “possessed” American flag hanging on one wall, with the words “help me” creased into the fabric. With a nod to the horror film “The Exorcist,” the overlaid text hints at the First Amendment’s plea for separation of church and state. The flag is surrounded by numerous photographs of gesturing hands that hark back to both fascism and the original salutation for the “Pledge of Allegiance,” as written and prescribed by Francis Bellamy in 1892. Playing in the space is a looping, eerie soundtrack of children reciting Bellamy’s original words, which did not include “under God” which was added in 1954 in response to the escalating Cold War. The salute was changed a decade earlier  in 1942, during WWII, when its likeness to the throngs of Germans hailing their Fuhrer were only too obvious. Layering histories and visual cues, the patrioritc symbolism within the piece has acquired new meaning in our current political climate.

Like Neo Theo, many of the other works in Dogg Days question the growing disconnect between data, histories, and social policies. In the video/audio work Executive Orders, Donald Trump’s signature is translated into an electro-cardiograph reading punctuated by audio sounds that imitate a gun-shot. Synthesizing issues of gun control, presidential power, and fragility of human life, Nguyen immerses the viewer in a metaphorical do or die situation. Similarly, shadow boxes displaying unassembled 3D printed gun parts, are imbued with a dark humor, whereby the artist cynically conflates the gun debate, racial profiling, and safety glass.

Gallery visitors will also encounter a dart board inspired by the central group oif figures in  Francisco Goya’s famous painting The Third of May, 1808, a ping pong game where your opponent is yourself,  and ready to use confessionals made from paper bags. Dividing the 2ndgallery space is a wall framed out with 2×4’s, yet  complete with a working door and pet flap.  With a reversal of function,  the pet-size door opens as any ordinary door might, while the human-sized door swings open in such a way certain to cause injury to any brave person who dares to walk through it.

Dogg Days opens Thursday, August 30, 2018 with an artist talk beginning at 5:30pm in the Zingg Recital Hall, followed by a reception at the gallery. The exhibition will be on view  through October 13, 2018. The gallery is open Tuesday – Saturday, noon-4p.m. and by appointment. The Jacki Headley University Art Gallery  is located in the Arts and Humanities Building, 121, on the Chico State campus.

Special thanks to David Barta, Victoria Davila, and Ty Mendoza.

About the Artist Trong Gia Nguyen:
Trong Gia Nguyen is a Vietnamese-American artist living and working in Ho Chi Minh City, Vietnam.  His wide array of works examines structures of power in their myriad forms, scrutinizing the soft foundation upon which contemporary life plays out, often behind the façade of fairness, sincerity, security, tradition, and civility. Regularly employing humor while at other times engaging sober reflection, Nguyen’s work elevates the condition of doubt as it reveals the undercarriage of our most trusted spaces –domestic, cultural, political, and economic-, laboring to disrupt the mundane while walking the fine line between joy and sorrow, subtlety and blatancy, night and light, and beauty and beast. Recent exhibitions includeCalifornia Pacific Triennial, Orange County Museum of Art, Newport, CA, USA (2017);The Foliage, Vincom Center for Contemporary Art, Hanoi, Vietnam, (2017); The Others, Piazzale Valdo Fusi, Torino, Italy (2015); Eye on the Storm, Housatonic Museum of Art, Connecticut, USA (2013); Satellites in the Night, Freies Museum, Berlin, Germany (2010), The Sixth Borough, New York, USA (2010); Sequences, Reykjavik, Iceland (2008); and Performa 05, Artists Space, New York, USA (2005).

The gallery is closed during spring break and the summer and winter sessions.
%d bloggers like this: